Many couplet around the world choose every year to get married in this beautiful region of Campania with its costs and amazing views on the Mediterranean. Getting married on the terrace with view on the Amalfi coast, with a musical background of the “mandolino”, is the dream of every couple, that is searching the most romantic place in the Mediterranean sea. The Amalfi coast is another part of the region. It 'a cocktail of incomparable beauty, original architecture, fruit of the arab influence and the Christian devotion.

It is a stretch of coast famous worldwide for its natural beauty, home to major tourist sites. It takes its name from the town of Amalfi, the core of the Coast not only geographically but also historically. The Amalfi Coast is known for its diversity: each country's coast is unique in itself, has its own character and traditions. In recent years more and more spouses from around the world choose to come here to get married, thanks to the landscape of the coast that has remained in the collective imagination of many foreigners as a symbol of Italy. So between Capri, Sorrento, Positano and Amalfi you'll be spoiled for choice to crown your dream of Wedding in Italy. And so the marriage merges with a wonderful honeymoon.

The location and the most interesting things to see along the Amalfi Coast are: the Cathedral of Amalfi and its cloister (Paradise Cloister), the Church of Santa Maria Assunta in Positano, the churches of San Salvatore of Birecto and Santa Maria Maddalena to Atrani , Villa Villa Rufolo and Cimbrone in Ravello, the churches of San Luca and San Gennaro in Praiano and their viewpoint, the Church of San Pancrazio Conca dei Marini and his lookout, the church of Santa Trofimena and the Roman villa at Minor, the collegiate church of Santa Maria a Mare and the Castle of San Nicolas de Thoro Plano to Maiori. Other romantic locations are Sorrento and the island of Capri. Capri is a Mediterranean island of calcareous origin that has been visited over the centuries by intellectuals, artists and writers, all enthralled by its magical beauty. A mix of history, nature, worldliness, culture and events that daily blend together and bring the Legend of Capri to life; a legend that sees no comparison anywhere in the world. Food and wine is an integral part of the way of life on the Bay of Naples and the Amalfi Coast. The local cuisine is mainly Neapolitan and is famous for its use of tomatoes, lemons, fresh vegetables, red peppers and olives. You will find an abundance of world-famous specialties like pizza, pasta, the pastiera cake, buffalo mozzarella cheese and fresh Mediterranean seafood. The cuisine of this region will make your wedding reception unforgettable.

Also Naples offers beautiful locations for a wedding in Itali . Napoli is a fascinating city, rich in history, culture, art and tradition. The first colonization of the area dates back to the IX BC, nearly 3000 years ago when "Greek merchants and travelers face in the Gulf to head towards the mining emporiums of the Tirreno" and founded Partenope in the area that includes the island of Megaride (the actual Castel dell'Ovo) and the promontory of Monte Echia. Palaces, churches, roads, ancient fortresses and castles in the middle of the sea, places full of charm and mystery that makes Naples a wealth of scenarios. Not just simple stages, but places symbol of this city, part of its history, myths and legends that the crossing. Wedding in Naples means to get married with the city, choose a unique world, full of sensations that you will 'emotions even more.

Your wedding on the Amalfi Coast……… 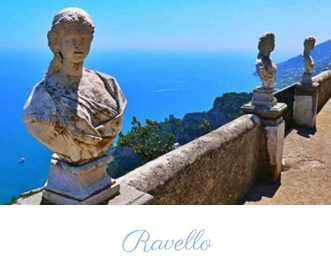 The most romantic town on the Amalfi Coast, here you can find beautiful villas on the cliff with amazing view terraces and lovely gardens. You can choose to have your civil wedding outdoor in Ravello Palazzo or in the beautiful gardens of the Princess's gardens, that overlook the mediterranean Sea. 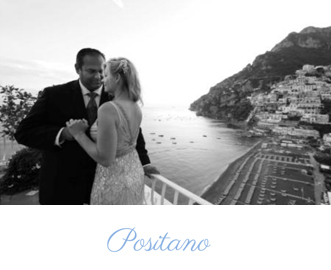 A group of white and colored houses climbing to the rock , among lemon scented gardens, which are reflected on a crystal clear sea, in a natural and unique architecture.This is the town of Positano , a fabulous place on the Coast where to celebrate a wedding on the Amalfi Coast. In Positano you can have a civil wedding on a typical terrace with amazing view on the sea or choose of of the amazing hotels and private villas where to celebrate an unforgettable event. 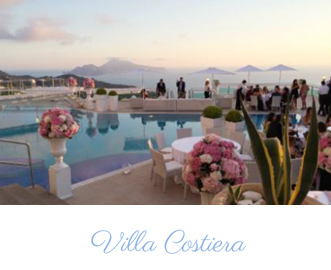 Villa Costiera represents an ideal frame for weddings, a fantastic terrace that looks out upon a truly unique view, embracing within just one glance the whole of the Neapolitan Gulf. The villa does only a wedding a day, you have the exclusivity of the whole villa on that day After dinner or lunch you can use the villa to dance but the wedding reception cannot last more than 8 hours. The villa offers also 12 rooms included the one we reserve to the bride and the groom the night of the wedding for free. 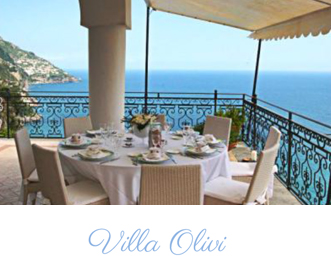 Private villa on the Amalfi Coast with terraces and gardens overlooking the mediterranean sea. It offers 6 double rooms with ensuite bathrooms and space for intimate and medium size wedding ceremonies and wedding reception. 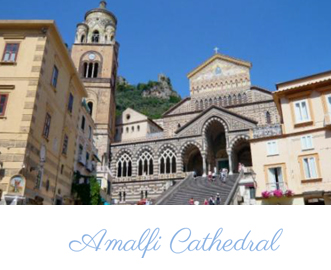 The Duomo di Amalfi is located in the square of the same name, it is an architectural complex that includes two connecting basilicas, a lower crypt, the stairway leading to the entrance hall, the bell tower and the Cloister of Paradise. It’s one of the most impressive churches in Italy and beautiful wedding venue for Catholic ceremonies. 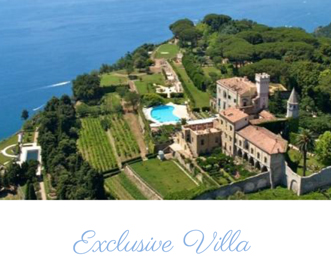 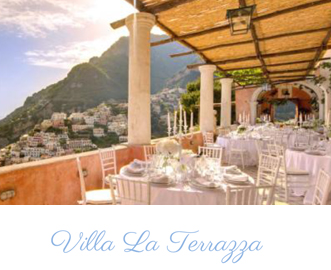 Elegant and exclusive 18th century villa will with breathtaking view on the sea and on the Amalfi Coast. The villa offers eight luxurious suites with antique furniture and historic frescoes. Ideal wedding venue for intimate weddings, the villa can accommodate symbolic and civil wedding ceremonies and wedding dinner for up 100 guests. 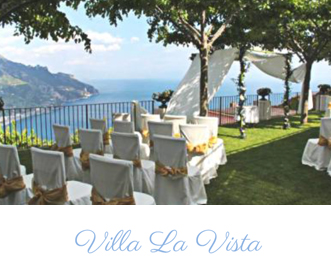 Liberty villa in Ravello. It is rented for 1 day for wedding, events and parties. The wedding venue is a small jewel immersed in a vast 3000sqm park of centenary trees and thanks to its position, it roof is the highest point of Ravello, enjoys a splendid 360° view of the coast. The large outdoor spaces offer the possibility of organizing every whim personalizing the event according to the guests taste, inventive and fantasy. 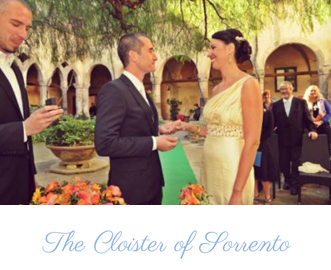 Sorrento is a small city built on cliffs over the sea and surrounded by lemon gardens. Here you can have your wedding in a 14th century cloister or in an historic palace. The Cloister offers a magical setting with it’s flowers, it’s plants, it’s graceful arches and the feeling of peace and quiet. Very intimate and exclusive and has an excellent acoustic. The other venue is the courtyard of a beautiful decorated 17th century palace 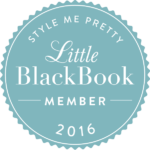 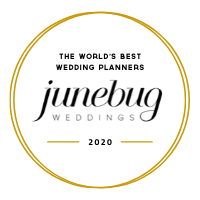